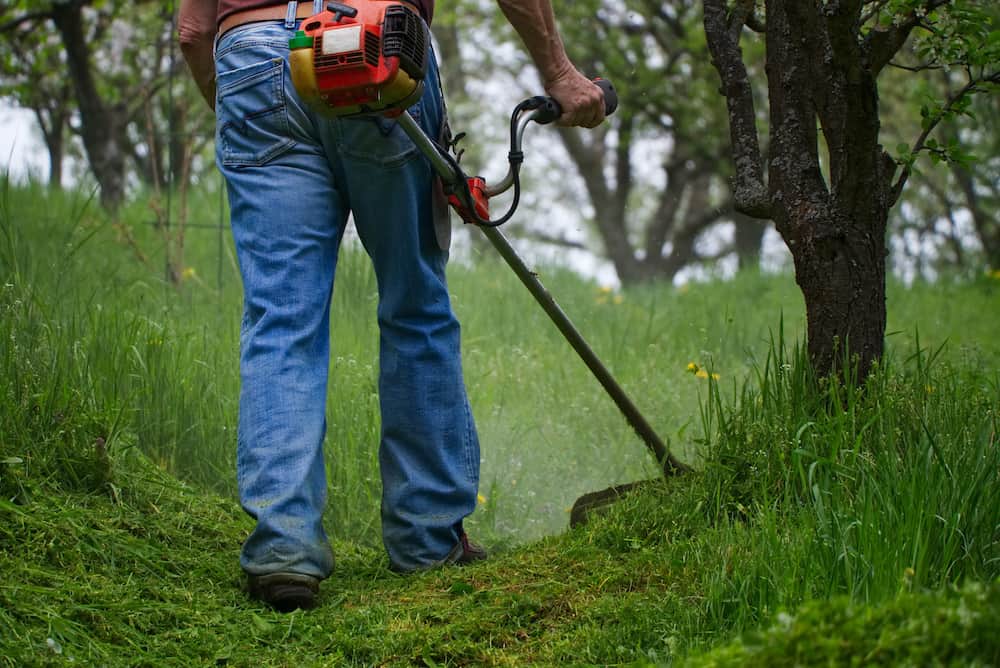 Choosing between a 4 cycle weed eater vs 2 cycle will give you a substantial difference in power and fuel consumption, which are two crucial factors of owning yard tools.

In this guide, we’ll explore the essential features of both four- and two-cycle weed eaters to help you make the perfect choice for your property.

There are a few substantial differences between the two.

One example is the type of fuel they require, which can make a lot of differences depending on the type of vegetation you intend to cut away.

Let’s talk about each one in detail so that you can decide which is the better choice for you.

What Is a Two-Cycle Weed Eater?

The first movement is the upstroke, which is when fuel will be brought into the crankcase as the device ignites the existing fuel in the machine, followed by the downstroke.

With the downstroke, your fuel will be transferred to the cylinder while the burned fuel is pushed out, producing the power output that you use to weed eat.

One of the main reasons as to why homeowners might prefer a two-stroke engine in their weed eater is because it requires less moving parts to work.

This then lessens the likelihood of deterioration over time.

Also, you might find that paying to have a two-cycle weed eater repaired is substantially less expensive than a four-cycle version.

Not to mention, their maintenance is far more accessible, too.

Benefits of a Two-Cycle Weed Eater

Apart from lowered repair costs and easier maintenance, a two-cycle weed eater could also be preferable for homeowners who want a lightweight yard tool that can easily be carried around their property.

As there are less moving parts in these tools, you’ll also find that their overall size is much smaller, which makes it easier to store in your garage or shed.

Some of the other essential benefits of a two-cycle weed eater include:

It can be quite frustrating to have a tool that produces a lot of vibration, as it can lead to incredible fatigue and a higher likelihood of stress injuries.

Two-stroke engines produce less torque and have fewer moving parts, which helps to reduce the amount of vibration you experience while maintaining your property.

With some of the older weed eaters on the market, you would be responsible for changing the fuel, oiling your string, as well as replacing the line when necessary.

All you have to do is empty the tank at the end of your season and change the strings when necessary.

Plenty of manufacturers have also taken the headache out of changing weed-eating strings by introducing novel technology that allows you to access the chamber and restring the weed eater quickly.

Considering a two-cycle weed eater requires a mixture of oil and gas in their fuel tank, you’ll find that keeping it stored in your garage is much simpler.

Compared to four-stroke engines that need to be kept level to keep the oil and gas separated, you can store a two-cycle weed eater any which way without any worries.

What Is a Four-Cycle Weed Eater?

Some may argue that four-cycle weed eaters are the more advanced version you can get your hands on when it comes to maintaining vegetation and brush on your property.

One thing that you’re bound to experience is an influx of power.

Four-stroke engines are much more reliable than a two-stroke because they provide a lot more torque.

You’re likely to find that most commercial weed eaters are designed to have four-stroke engines, as they have an assortment of high-powered benefits.

Benefits of a Four-Cycle Weed Eater

There are several significant advantages to make a note of when you start to look at a four-cycle weed eater, including:

With the addition of four-stroke engines on the market, manufacturers have been able to provide far better fuel efficiency compared with the older two-stroke counterpart.

You’ll certainly appreciate how you’ll be able to lessen the amount of money you have to spend on fuel.

The same is also true of the number of times you’ll have to refill the tank while tackling time-consuming projects.

Also, you’re likely to find that a four-cycle weed eater will have a larger gas tank.

This allows you to work for longer without having to stop for continuous breaks.

When you take the fuel efficiency of these models into account, you can also guarantee they are likely to produce fewer emissions.

This, in turn, can help to limit the number of toxic fumes you’re exposed to.

You’ll find that opting for these designs is a far more ecologically responsible decision to reduce your impact on the environment.

By far, the most notable benefit of four-cycle weed eaters is their impressive amount of torque, which is the force that requires things to spin.

Four-stroke engines will generate more torque than a two-stroke, which offers an ample amount of power for you to put to good use, you’ll also find they are much quieter.

When dealing with thick brush and vegetation, a four-cycle weed eater will power through any plant life without a significant loss in power.

This is because the torque will ensure your strings are continually spinning at the perfect rate to chop effortlessly.

It’s important to note that with the convenient and innovative technology in four-stroke weed eaters, you’re likely to pay more for these tools than their less powerful counterparts.

With that said, you’re going to have access to higher quality parts that are designed to last over several years of regular use.

You might also find the warranties for four-stroke engines are much more comprehensive than what you would receive for two-stroke units.

The primary difference between a 4 cycle weed eater vs 2 cycle is the amount of power you’ll be able to put to good use.

If you need a power tool that is equipped to deal with all types of vegetation on commercial and residential properties, a four-cycle weed eater is highly recommended.

Also, you’ll find that they are far more fuel-efficient, quiet while operating, and produce fewer emissions to help protect the environment.

How To Fix Plastic Gas Tank On Lawn Mower

How To Start A Snowblower That Has Been Sitting

How to Get a Green Lawn Without Weeds

How To Fix Plastic Gas Tank On Lawn Mower

How to Get a Green Lawn Without Weeds

How To Use A Dethatching Rake

Where Can I Rent A Riding Lawn Mower

How To Rake Leaves

How to Change Oil in Snowblower