Single Stage vs Two Stage Snow Blower: Which Is Better? 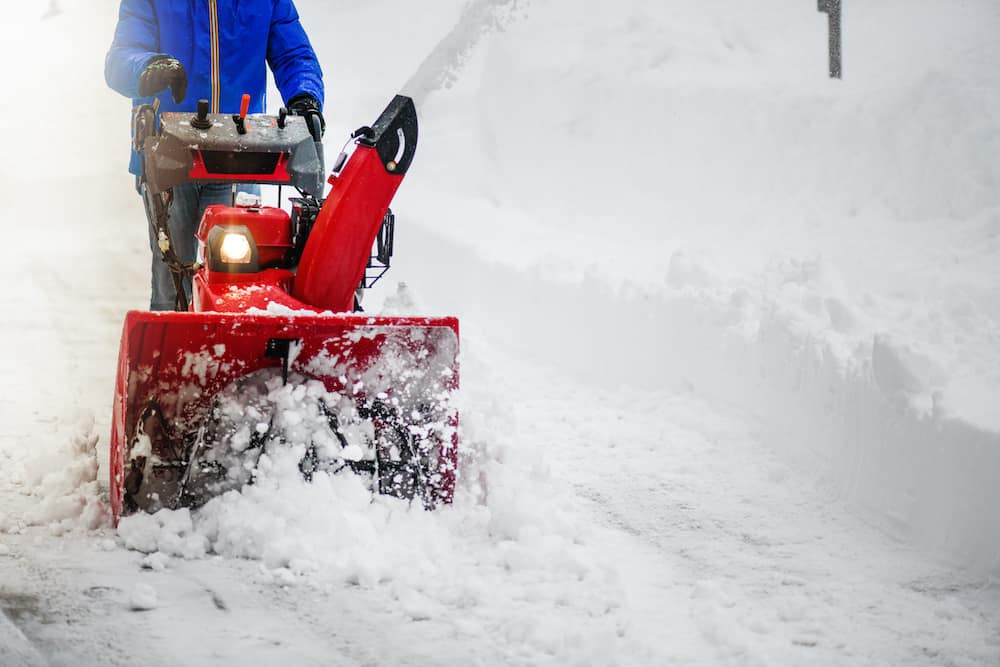 Living in areas where it is always snowing requires that you use more than just a shovel to remove inches after inches of snow.

Of course, you could always try and shovel the snow, but it would take you hours of back-breaking work that you really don't have to suffer from.

A good alternative that would get the job done quickly is using either a single- or two-stage snow blower.

Single-stage snow blowers are suitable for smaller jobs, while two-stage options are ideal for larger areas.

If you’re not sure which to choose, take a look at the pros and cons of a single stage vs two stage snow blower below.

What Is a Snow Blower?

A snow blower, or a snow thrower, is a type of machine that helps remove snow. Its engine gives it enough strength to suck in the snow and shoot it out of the way.

These machines are useful if you’re covering an area that you usually wouldn’t be able to with a shovel. What’s more, they are strong enough to move both compact and fluffy snow.

Overall, they are suitable for a number of different applications. This means they don’t just scoop up snow, but they can be used to move leaves and take on other yard work, as well.

To power it up, you will need to either plug the device in or fill it up with gas, depending on the model you choose.

There are multiple types of snow blowers on the market, and knowing which model to invest in is key to getting the job done right.

As mentioned, if you were trying to clear off a sidewalk or small area, a single-stage snow blower would be ideal.

On the other hand, a two-stage snow blower is useful for larger areas, such as fields or commercial land.

Considering these facts can help you determine which type of snow blower you will need for your property.

A single-stage snow blower uses a single rotating part to help gather snow. The machine works to collect snow in front of it and then pushes it upward before dispelling it out.

The pipe where the snow shoots out can be adjusted, making it easy for you to place the snow wherever you want.

When Should I Use a Single-Stage Snow Blower?

When the snow is either light, fluffy, or isn’t compact, then you can easily use a single-stage snowblower.

Additionally, if you’re only clearing off a small area, such as a driveway, sidewalk, or a small yard, you can use a single-stage snow blower to get the job done.

While you can still use it for ice and slush, we don’t recommend you do.

The reason is that the engine isn’t strong enough to remove that type of snow.

If you do, the ice or slush will end up getting jammed in the machine, or the area will need to be plowed multiple times.

Advantages of Using a Single-Stage Snowblower

First of all, these machines are ideal for you if you live in an area that gets anywhere from two to six inches of snowfall.

You should buy one if you need a machine that can clear areas low to the ground. This means you can strip the snow off of your driveway down to the bottom if your area isn’t graveled.

Single-stage snow blowers also come in a variety of different sizes, allowing you to choose one that will fit your needs.

In general, you can expect a single-stage unit to plow snow up to 22 inches in width. As such, they can fit into compact areas that a regular bulky two-stage snow blower couldn’t.

Lastly, a single-stage snow blower is gentle enough to be used in most homes. Any area with a deck, patio, or driveway can be safely plowed without damaging the surfaces.

A two-stage snowblower may be too harsh to use on these areas unless you need to plow a gravel surface.

Disadvantages of Using a Single-Stage Snowblower

As with anything else, there are some downsides to using a single-stage snow blower, too.

Because its engine isn’t as strong as its counterpart, it doesn’t throw snow as far as a two-stage snowblower.

As a result, you will likely have a trail of snow near the area that you are plowing.

Aside from that, it’s not as powerful as a two-stage snowblower. While it can clear most snow, it may not be strong enough to move compact snow or ice.

For this reason, you will need to switch to a two-stage snow blower if you expect to be plowing snow more than once a week.

Lastly, a single-stage snow blower isn’t suitable for graveled areas. Why is this, you ask?

As mentioned earlier, the bottom of a single-stage snowblower rides low to the ground. If you use it on graveled or uneven surfaces, it will also suck up the rocks.

The problem with this is that it isn’t designed to dispel rocks. So, if stones get into the machine’s system, there’s a good chance that the unit may end up getting clogged. 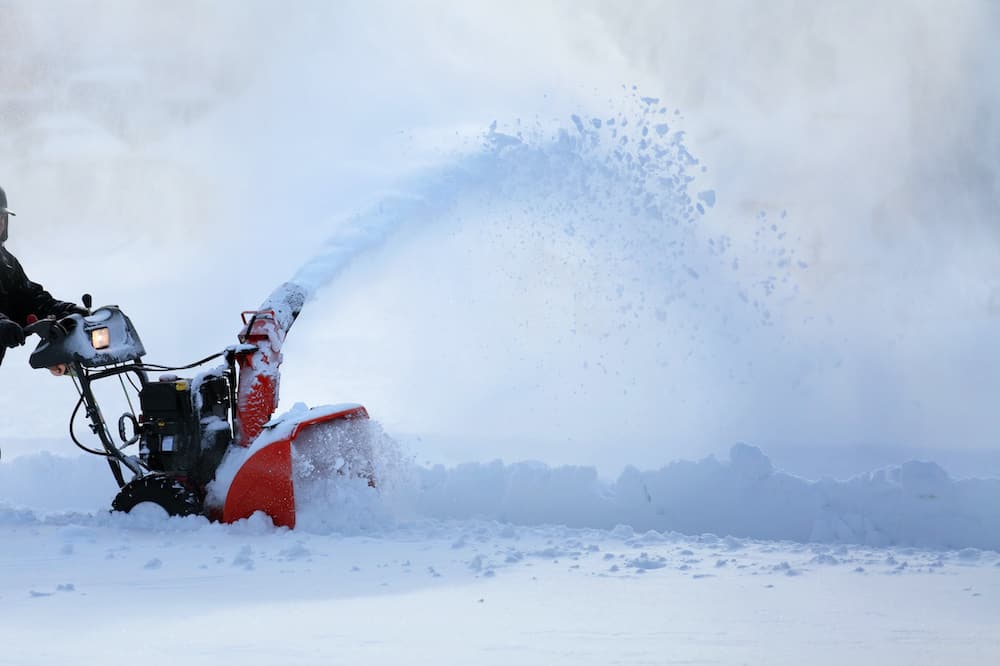 Two-stage snow blowers use a rotating auger to help move snow. The secondary parts are located in the impeller and help blast the snow away from the area you are currently in.

These machines can blow snow much farther than their single-stage counterparts, making them useful if you are plowing a large field.

One of the only downsides to a two-stage unit is that it is heavier than a single-stage snow blower.

When Should I Use a Two-Stage Snow Blower?

Plus, they are ideal if you are trying to clear a large area, such as a commercial building, a large lawn, or even a field.

These machines are designed to plow heavy snow and ice.

Advantages of Using a Two-Stage Snowblower

Using a two-stage snow blower has many benefits, especially if you live in an area where it heavily snows.

One of the most significant advantages is that the machine has a spinner auger that helps gather the snow and cuts it into manageable pieces.

In this way, the engine won’t get clogged, and the machine will still be able to expel the snow without much trouble.

Additionally, the blower is easier to push forward.

The spinning auger also draws snow towards the machine, which helps push the machine through heavy snow.

You’ll find that you would be able to get more work done in a shorter amount of time with this type of snow blower compared to a single-stage unit.

Plus, its automatic pull ensures that you won’t be struggling to push the device.

Another massive benefit of using a two-stage snow blower is that it doesn’t come into contact with the ground.

This means you can plow over areas that have gravel, stones, or other rocky surfaces. The ground won’t be damaged, and you’ll be able to get most of the snow and ice off the area.

Lastly, a two-stage snow blower includes extra impellers. What this does is expand the width of the area that the machine can clear.

In most cases, the average width that the machine can clear is 20 to 36 inches.

Disadvantages of Using a Two-Stage Snowblower

While a two-stage snow blower is handy in most situations, there are still some drawbacks you should be aware of before making the switch.

First of all, these are heavier than single-stage models. This is because the machine has extra parts that add to its overall weight.

Secondly, this type of snow blower is bulkier, which means you’ll need more room to store it when it’s not in use.

Aside from that, they are significantly more expensive due to their enhanced parts. Nevertheless, they are worth the investment if you live in an icy or heavy snowfall climate.

Lastly, a two-stage snow blower is slightly raised off the ground.

While this means it does clear most snow, it won’t pick up all of it. As a result, you will notice that there will still be a thin layer of snow on the ground.

Because of this design, the machine doesn’t pick up rocks or other small rubble, which lessens the risk of jamming.

It can be challenging to choose between the two models, especially if you live in a climate that has both heavy and light snowfall.

We’ve decided to make it easier to decide which to go for by giving you a checklist for each type.

For a single-stage snowblower, you should be able to identify the following climate conditions:

For a two-stage snow blower, you should be able to identify these climate conditions:

As you can see, the two are very similar. It is up to you to choose which one is suitable for your environment.

If you’re still unsure, we suggest discussing it with your neighbors or looking deeper into the weather in your area.

Snow blowers are useful in the long run because they can help you clear large amounts of snow quickly.

If you were to use a shovel, it could take you hours to get the same results as a snowblower. Just be sure that you’re getting the correct model for the environment you live in.

Overall, we don’t think it matters too much which type you use, as both versions are useful in different situations.

A single-stage snow blower is suitable for light snowfall and works for most climates.

On the other hand, a two-stage snow blower is better suited for areas that have heavy snowfall that is slush and ice.

Previous Post How to Edge a Lawn With a String Trimmer Next Post Are Track Snow Blowers Better Than Standard Snow Blowers?