It’s tough to shovel snow and push it around, and though it can be a great workout, it’s often dangerous.

Winter maintenance is easier with a snow blower and requires less time to use.

However, you should choose the best one so that you can clear snow away and do so quickly and precisely.

If you’re thinking about buying one, choosing between electric vs gas snow blower is also critical.

Hence, we'll talk about these two types of snow blowers for you to make a more informed decision.

Electric snow blowers are often widely available throughout the USA, but they have some usage requirements.

As such, before you choose this option, you should make sure that it’s going to do what you require.

Primarily, these machines run on electricity provided by an outlet.

If you’ve only got to remove a little snow or have a small space to clear with a small surface area, this could be the right choice.

The electric snow blower works similarly to any other electronic device. You must plug the cord into an appropriate outlet so that it gets power.

As similar to any products, before using the tool, it’s best to read the directions that come with it.

Generally, though, you press a button to start the machine and use it as you see fit.

With this option, there is an auger that moves the snow upward to get pushed away and out from the location you’re clearing.

The chute does this, so it’s best to situate the blower where the snow goes away from the area.

Electric snow blowers also come with a few variations between the designs.

For example, the snow blower might feature electric shovels to clear roughly 12 inches of snow at a time.

Generally, when operating electric snow blowers, they are very quiet. If you have to go out and clear snow early in the morning to get to work, you are less likely to wake the neighbors.

Of course, they’ve also got a smaller carbon footprint, making them more eco-friendly than their gas counterparts.

As such, there’s risk of spilling gasoline or having puffs of black smoke from trying to start the snow blower.

You may also find that electric snow blowers are lighter in weight because they don’t need or have a big motor.

Plus, you don’t have to fill it with gasoline and oil, which makes the product heavier.

Electric snow blowers can also be a little smaller, which means you may be able to store it in the garage.

There’s also less risk of damage while in storage since there's no gasoline or oil that will go bad or sour.

What's even better is that usually, electric snow blowers have a push button to start it.

That means you won't tire out your arm from pulling on a cord each time you need it to run.

Often, the electric blower is a great tool to clear off stairways, decks, patios, and short drives.

The electric snow blower does have a few issues to note.

First, the cords are often short, ranging from four to six feet. For most people, the issue is finding an outlet that allows them to work in a specific area.

Thus, you need to have an outlet near where you want to use the machine.

Also, with such short cords, it’s often difficult to plug in the electric snow blower.

If you’re using it down a long driveway, you may need to use an extension cord.

Most manufacturers, though, don’t recommend that you do that since it could lower the power output.

Additionally, using extension cords could be dangerous and risky.

That said, you can find electric snow blower models with up to 21 inches of width and 12 inches of clearance.

You must also keep in mind that often, the electric snow blower overheats if you use it for more than 15 or 20 minutes.

The engine can’t keep up with the work it must produce, which is especially true when you use the blower to clear away heavy snow, such as the very wet stuff.

You also shouldn’t allow the power cord to get tangled around the machine. If it does, you run of the risk of damaging the power source.

It also goes without saying that water should not get into the machine.

Thus, since you are working with wet snow, it’s often best to let the snow blower rest and dry before putting it away.

On the other hand, many people choose to shovel as much snow as they can and then use their electric blower.

This way, it saves them some time and prevents issues with the blower.

Electric tools are often simplistic when it comes to maintenance needs.

That is because you don’t have to remove and change any fluids like oil and gas.

Plus, there aren’t any parts, such as spark plugs, that need frequent cleaning; in fact, you just have to dust them off periodically and use them.

That is the best way to keep them running, but of course, you should also store them in a safe, dry place that isn’t too warm.

It’s also a great idea to ensure that your electric snow blower's cord doesn’t get tangled up.

Before using it, you must also check the cord to ensure that it isn’t frayed.

When it comes time to use the machine, always make sure that it is running properly.

You may also want to check the outlets to ensure that there is enough power going to the machine. 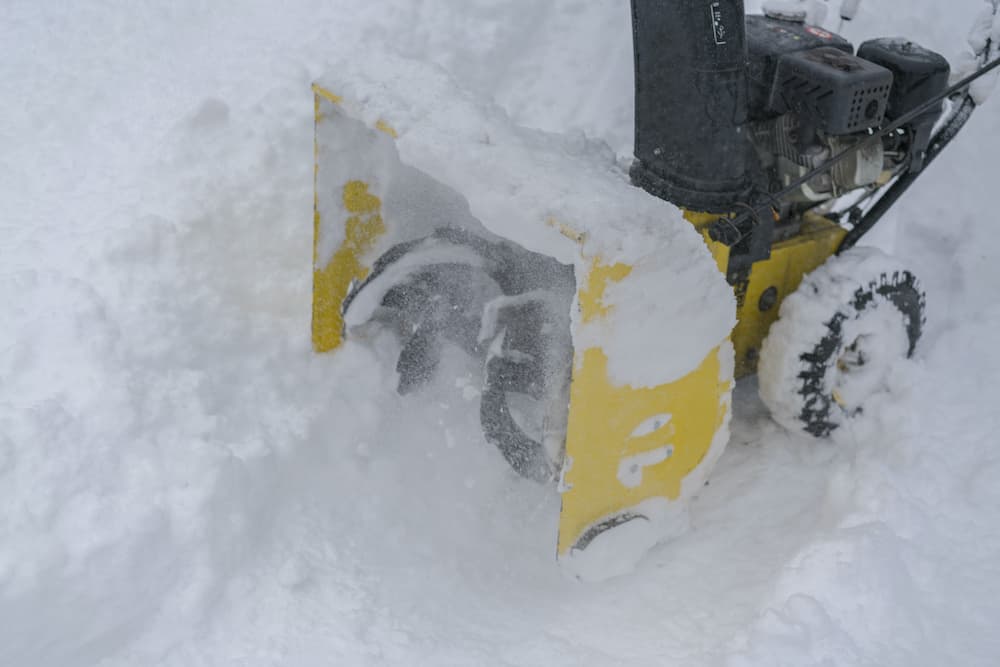 Gas snow blowers are readily available from almost any hardware store and other retail locations.

You’ve also got more manufacturers and options from which to choose from as compared to electric snow blowers.

The main problem is that gas snow blowers require you to have some knowledge of how to use and care for them.

Still, they’re a beneficial tool, especially if you live in an area prone to significant snowfall every winter.

You can find either dual- or single-stage designs for gas snow blowers. Both feature an auger, which propels the snow up through its chute.

The snow is then thrown clear of the area in which you’re working.

With a dual-stage design, there’s also an impeller, which sits behind the auger.

The impeller makes it more efficient, so the dual-stage gas snow blower is ideal for wet or heavy snowfalls.

Generally, gasoline is used to power the engine and requires oil to maintain the parts and keep them lubricated efficiently.

Usually, gas blowers are highly durable, so they can last for a longer time than their electric counterparts.

Similarly, you can use them during bouts of heavy snow with ease and efficiency.

Since they're powered by gas, there aren’t any electrical cords to deal with and would get in your way, which means your movements aren’t restricted.

Gas blowers often have a width of roughly 45 inches and easily clear around two feet of snow.

They may also be self-propelled, which requires less energy from you to use them.

In general, you are getting twice the clearance than with the electric blower.

There are also many sizes of gas snow blowers available, which can fit almost any budget. Smaller ones are just 12 inches wide, but they can go up to 45 inches.

Additionally, modern models are often self-propelled, so you don't have to push as hard to get through the snow.

Since they cover larger areas, you can remove larger amounts of snow with a single pass. That also means less time spent outside in the cold air.

You can also point the chute in the direction you want the snow to go.

These snow blowers also have adjustable height features to help you work in sections for heavy snowfalls.

Since there’s so much maintenance involved in gas snow blowers, you may find it harder to keep the machine running.

Also, you need to drain any unused oil and gas at the end of the season. You can’t let it sit throughout the spring and summer months because they can damage the machine.

Storage is also a concern when you own a gas snow blower. It is often bigger than electric versions, so it may not fit in your garage.

You’ve also got to worry about oil and gas leakage, which can cause fumes to penetrate the area.

This situation can be dangerous to your health and could be damaging to the property.

Gas-powered snow blowers are also heavy and bulky, which can make it harder to use them. Of course, they’re also louder because of the motor.

If you plan to use them in the early morning before going to work, you’re more likely to wake up the neighbors.

There’s also the issue of the pull-start system. You’ve got to have a strong arm to get it cranked up.

This is often harder at the beginning of the new winter season.

Gas snow blowers require a lot of maintenance when compared to their electronic counterparts.

You’ve got to prepare them for the cold and snow season, but you also have to maintain them throughout the season.

The blower uses unleaded gasoline and special oil; both of which must be changed regularly.

Of course, spark plugs have to be replaced and cleaned periodically.

There are also pins, belts, paddles, bolts, and air filters that you need to check and replace.

Before and during use, you should ensure that all of the bolts are tightened.

The fuel system also has to be maintained. It might require you to purchase a fuel stabilizer to ensure that the gasoline doesn’t get gummy and clog up the carburetor.

The right choice when focused on an electric vs gas snow blower depends primarily on how you plan to use it.

If you just have a small area to clear and there’s little to no snowfall, electric snow blowers might be ideal.

On the contrary, areas with regular, deep, or wet snow might require a gas blower.

In the long-term, gas blowers are often better because they can be maintained to continue working each season.

Likewise, it’s ultimately easier to service them if something goes wrong.

How To Make A Wooden Windmill